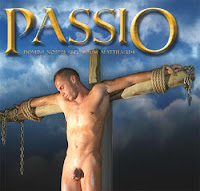 A couple of years ago Passio would have gone the same route as Visions of Ecstasy, A low budget art-house film, Which had depictions of the crucified jesus being caressed on the cross. Visions of Ecstasy was refused a licence by the British board of film censors solely because it violated our archaic blasphemy laws, Laws designed to protect the fragile feelings of the religious in cases where someone has the audacity to believe different to them.

Christians and their apologists can feel free to be offended, And also free not to watch the film, But hopefully now they will realise that they aren't free to tell other people what to do and they aren't free to have the law protect them against criticism or content that they personally don't agree with. No doubt christians will be flocking to sex shops dressed in seedy macs and shielded by shades to purchase this film, Their leaders certainly will be. Leaders who, if they they aren't buying homosexual sex, are taking it without permission from young boys.

Something about christianity has always struck me as being incredibly homoerotic anyway. If they aren't talking about how another man loves them they are banging on about feeling him "in them" and every so often they symbolically eat and drink him in a ritual that could as easily be described as symbolic oral sex as it could human cannibalism.
By [ Matt ]