In an attempt to drag humanity back to the stone age father Federico Lombardi, the pope’s spokesman, said that without a spiritual life, people risked losing their souls and went on to condemn phones and the internet claiming they could cause the "spiritual dimension", Whatever that is, to dry up and die.

Of course, Being religious and therefor inherently hypocritical the vatican doesn't think modern technology is bad when it's used to further their own agenda, like when the pope sent out daily text messages during a celebration in Sydney, Erected giant digital "prayer walls" and published texts from the Vatican library online.
By [ Matt ] 4 comments:

Another Muslim Uses Religion To Get Out Of Doing His Job

Common sense prevails as a British muslim cab driver was fined £300 for refusing to take a blind man and his dog - something he is required to do under the terms of his licence - On the grounds that carrying a dog, An animal considered unclean in islam, Is against his precious religion.

Of course, being from the most "honest" religion of all Mr Roshanmoniri, upon finding out that a complaint had been filed, went to his doctor and got a suspiciously convenient letter stating that he was allergic to dogs - something he apparently forgot to tell his blind passenger and instead went with the "it's against my religion" excuse.

here's an idea, It's not radical, But perhaps You should just do the fucking job you are being paid for and stop hiding behind your primitive desert myth when demanding special treatment.

Besides being illegal, denying a blind man a ride on the grounds that you don't like his dog is a pretty shitty thing to do and this guy should be completely ashamed of himself.
By [ Matt ] 4 comments:

The come-back of ted haggard, the "christian", multimillionaire, disgraced mega church leader who was caught (and admitted) partaking in "inappropriate behaviour" with a male prostitute and buying meth off of aforementioned rent boy has begun. And guess what, He wasn't actually responsible for any of it! now now cynics, hear the man out.. Apparently it was all the fault of an unspecified man who had an unspecified "sexual encounter" with him when he was a child. It just took him 40 years to remember about it.

Now i know what you are thinking.... "how convenient".

"Hanging out" with gay hookers and buying drugs is one thing, But lying is against the rules, He - The guy who had sex with a gay prostitute and bought drugs - couldn't possibly be guilty of lying and making up stories so he hasn't got to take responsibility for his action, He's a "man of god".

And it's not all bad, This display of utter hypocrisy, or rather, Getting caught, Has now made him a "stronger christian".

people are often sorry right about the time they get caught. Wasn't too sorry at the time, But now, He can barely open his mouth without apologising.
By [ Matt ] 1 comment:

It's nice to see christians exposing themselves as intolerant imbeciles yet again by demanding that everyone believe the same as them.

Probably the funniest line to ever dribble from the slack jaw of a redneck;
"The united states is based on freedom of religion, Speech, etc., Which means you can believe in god any way you want (Baptist, catholic, methodist, etc.), but you must believe". 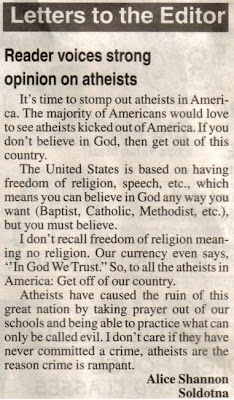 I see the "religion of peace" are up to their old tricks of killing people for the crime of being abused by filthy scum. Apparently, in Somalia, if you are 13 and are unfortunate enough to be gang raped you will also get stoned to death, in a stadium, watched by 1000 people, for the crime of adultery.

Let me predict the reaction the "islamic community" will have to this story;
1. Disassociate themselves and their religion from it.
2. Criticise me for highlighting it.
3. Not even come close to condemning this disgusting act.

A 13-year-old girl who said she had been raped was stoned to death in Somalia after being accused of adultery by Islamic militants, a human rights group said.

Dozens of men stoned Aisha Ibrahim Duhulow to death Oct. 27 in a stadium packed with 1,000 spectators in the southern port city of Kismayo, Amnesty International and Somali media reported, citing witnesses. The Islamic militia in charge of Kismayo had accused her of adultery after she reported that three men had raped her, the rights group said.

"This child suffered a horrendous death at the behest of the armed opposition groups who currently control Kismayo," David Copeman, Amnesty International's Somalia campaigner, said in a statement Friday.