As if teaching creationism in a science class and claiming carbon dating is flawed wasn't bad enough, Christian science teacher John Freshwater though it appropriate to burn the image of a cross onto his students arm in some kind of sick ritualistic branding. 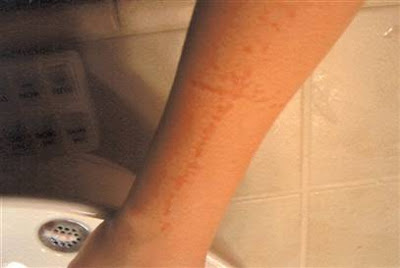 The Mount Vernon school board voted 5-0 to pass a resolution of intent to terminate the contract of middle school teacher John Freshwater.

Freshwater used a high-frequency generator to burn the religious symbols on to his students arms. In a quote to end all quotes, Dave Daubenmire, a friend of John Freshwater said; "With the exception of the cross-burning episode ... I believe John Freshwater is teaching the values of the parents"

While some of the students questioned by investigators said Freshwater was "a great guy", Lynda Weston, the district's director of teaching and learning, told investigators that she has dealt with complaints about Freshwater for much of her 11-year term at the district.

A report by independent investigators found that Freshwater taught creationism in his science class and was insubordinate in failing to remove a Bible and other religious materials from his classroom.
By [ Matt ]