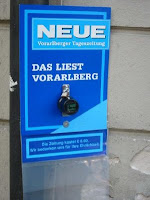 For a long time i have suspected that those who profess to have some kind of enhanced morality are probably the most deceitful, and now i have a study to back up my suspicions. Not that i have ever needed a study to support my theory

In the latest study measuring honesty, researchers in Austria set up an experiment in which people were able to buy a news paper by dropping money in to a box and taking a newspaper. The newspapers were hung beneath the box in a plastic bag and there was nothing physically stopping people taking a paper without depositing the 60c required.

What the researchers did was put one newspaper in the bag and waited for someone to take it. if the person deposited some money the box was emptied and the money counted. The person was then stopped further up the street and asked to participate in an interview in which they were asked questions without being told that the interview was in any way connected to the newspaper purchase. The amount they paid could then be cross referenced with the answers they gave in the interview.

Unsurprisingly most people didn't pay the 60c asked for and the average paid was only 26c, But it gets really interesting when we start looking at how much below the average was paid by people of different groups. Shockingly, well, not


I don't know their god calls it, But i call it theft and a demonstration that they are either utter hypocrites or don't actually believe in this god shit any more than i do.

Email ThisBlogThis!Share to TwitterShare to FacebookShare to Pinterest
Tags: hypocrites