Creationists Use Super Evolution When It Suites Them 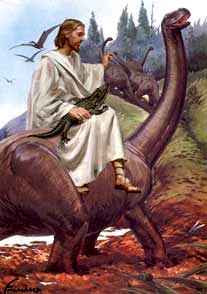 In a monumental display of intellectual dishonesty and hypocrisy the creation museum use "super evolution" to explain how Noah got so many animals on to his boat.

when presented with the problem of how Noah managed to gather all of the 100,000,000 [1] species of animal and keep them alive on the boat the creationist museum comes up with this amazingly simple concept, All by themselves.

What they claim happened is that Noah only took a few of each type of animal [2]. For instance, He took crows, But not humming birds, He took dogs, But not wolves and he took pumas, But not lions. And then -- This is the amazing part -- After the flood, Through genetic mutations and natural selection, Different species managed to branch off from the species that Noah originally took and went on to to form the multitude of species we see today. Calculations estimate that a speciation would occur about once a day to go from the 10,000 animals the creation museum claims Noah caught to the 100,000,000 we have today.

Now, I know what you are thinking. Isn't this what creationists categorically claim didn't happen? Well it would be, but they use a special ingredient. God done it. It's simply not good enough to have evidence, genetic similarities, retroviruses and chimp chromosomes to prove that evolution and speciation has always happened. It turns out "proof" is nothing more than the need to introduce something to make a separate and equally unsupported preconceived conclusion possible.

But isn't it a problem that for so long creationists have been saying evolution and speciation through natural selection was impossible? It would be, But you have to remember creationists are filthy, Dishonest liars. so why would it be a problem? They have the ability to deny something when it contradicts them and embrace it when it supports them. It's one of the benefits of being intellectually dishonest and having absolutely zero integrity.

Of course, They don't have a shred of evidence that this ever happened, So naturally they are going to believe it all the more passionately and be all the more offended when someone calls them out on their bullshit.
By [ Matt ]