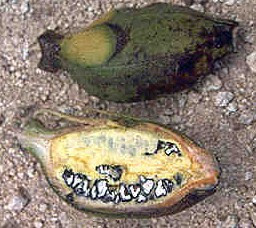 Most of you would have heard of Ray Comfort and his cretinous arguments for intelligent design. The most famous argument being his "atheists nightmare" video where himself and Kirk Cameron sit around making idiotic statements and then congratulating each other on being right in that typically self-righteous smug way that is often found in christians.

In the atheists nightmare video Ray Comfort makes the claim that the banana is designed to fit in the human hand, Has a "tab" at the top to make it easy to open and is easily digestible, And this, According to Ray, Is proof that it had a creator - "Almighty god".

In his rush to put together a moronic argument Ray must have neglected to do his research. Because even a passing acquaintance with the history of the banana shows that the banana we eat today, The one Ray uses for his demonstration, Only looks and tastes like that because of thousands of years of cultivation. Evolution, The thing Ray is trying to disprove, Is entirely responsible for the very thing that Ray is using as evidence for a designer.

Wild bananas, The one found in the image at the top of the page, Taste bitter, Have a tough skin and are littered with tens of large, hard seeds. So in a way ray is kind of right, the banana did have a "designer", But it wasn't Rays god, it was primitive man who used evolution and cultivation to change a species of plant in to something more palatable.

You FAIL Ray. Have another go, But this time, Do some research, Moron
By [ Matt ]