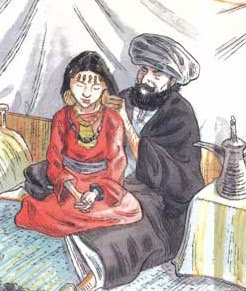 In another demonstration of how they want everybody to do as they say and follow their rules, offended muslims have started a petition to have Wikipedia remove images depicting their prophet Muhammad. The petition currently has 32,000 signatures

In Islam pictures or Prophet Muhammad (PBUH) and other holly figures are not allowed, but on wikipedia they has published some pictures that are showing not only a body with white face but an image that has a complete face.. that is even not allowed by SHITAT fact of Islam.
i request all my brothers and sisters to sign this petition so we can tell wikipedia to remove them.
http://en.wikipedia.org/wiki/Muhammad
specially this image
http://en.wikipedia.org/wiki/Image:Maome.jpg

See, The tolerant religion of islam wants only one thing. They want everybody to do as they say all of the time. If us infidels could just agree to that one small request, Everything would be fine.

What they don't realise is that the only people obliged to follow the rules of islam are muslims. They can invent whatever wacky rule they like, But what they can't do is demand everybody else abides by it.

Of course if we were to have a competition over who is offended more they would no doubt feel entitled to win because they are offended over disrespect to their religion, Which apparently trumps every other kind of offended.
By [ Matt ]